The climber you think you are vs. the one you really are 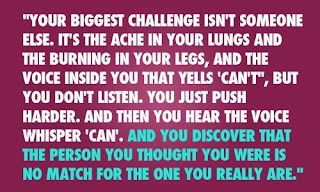 I recently came across this little meme on Facebook, posted by Strong is the New Skinny. It really resonated with me because in many ways it sums up how my winter season has gone.  Which, in one word, is AWESOME!!!

To begin with, I never considered myself much of an ice climber. I always felt a bit weird on ice, like the movement never flowed. My footwork was terrible and I'd pumped out by the top of 50 ft WI3. Of course, the more pumped I got, the more stressed out I became, the more I over-gripped the tools, etc. We all know this goes nowhere good. So even though I've been climbing ice over 8 seasons, climbing 2-3 times a season wasn't really getting me anywhere.

I can't even remember how it began, probably one of my climbing partners who prefers ice climbing to rock. Or it could have been getting ditched by my partner on Christmas for a desert climbing trip, but somehow, back in November I got a wild hair to do some training for ice season. I kept it simple- some deadhangs off my front porch on my tools. Then doing some ladder sets of assisted pull-ups off the tools, then doing some endurance-focused stuff, using small feet to pull-up and lock off on the tools while I 'swung' them and repeating that movement for as many minutes as I could hold on. I even got lucky enough to do a little dry-tooling at the local gym back in December, while we all sat and waited impatiently for the ice to come in.

The routine was modest, but I kept at it. More curious then anything else to see what, if any, affect it would have on my ice season. From the first day out, I noticed a difference. It wasn't huge or obvious, but I did notice that I climbed 3 or 4 pitches that day without having a major flame war in my forearms. I took that as a good omen.

My next trip out was pure fun. I went climbing for the weekend with several girlfriends and we had as much fun giggling and laughing as we did ice climbing. The beauty of this experience was that by having such a fun time climbing, I was much more motivated to continue to going out climbing. In fact, this season, I have climbed more then the last 5 years combined and almost all of my days out have been with other ladies. I think that has had a lot to do with having such a great season. Watching them push themselves and succeed is so inspiring and intoxicating, one can't help but want to push themselves a little bit too. In fact, thanks to those ladies and their incredible energy, I took on one of my first leads on ice. Then my third, fourth and fifth. 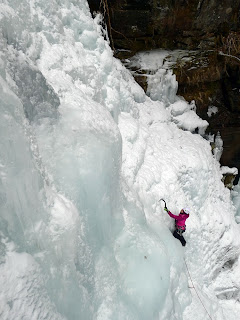 Another thing I never thought I would do happened to me yesterday at the climbing gym. My first full body weight pull-up. I'm still so surprised by it, I have this urge to do pull-ups off of everything now, just because I can. I didn't intend to do a pull-up that day. I came to the hang board with the intention to simply do some hangs off the open-handed slopers to build some contact strength. For whatever reason, I grabbed the small jugs at one point and began to pull and was shocked when my chin was suddenly level with my hands. I've never been able to do an unassisted pull-up before, but then again, I've never really worked this hard before. I've been running nearly every day and cleaning up my diet in order to lose a few extra pounds that gravity likes to toy with when I'm climbing. I've also been doing bodyweight exercises like push-ups and squats. Achieving a pull-up for the first time is validation that the hard work I am doing to optimize my strength to weight ratio for climbing is working. I still have a ways to go, but getting that pull-up is a milestone along the way that just motivates me to keep working hard. It's also a great reminder that I'm stronger then I think am and that I am more limited by my thoughts then my strength.

I hope to take this lesson with me into the rock climbing season. For awhile now, I have been limited in my leading abilities, mostly by my head. My goal this season though is to take the achievements of ice season to heart and remember in those moments where I am gripped with fear, that I 'can' and that the climber I am is stronger then the climber I thought I was.

Betty
I got bit by the climbing bug more than 14 years ago. In that time climbing, and its relevance in my life has ebbed and flowed, but never disappeared completely. Through these cycles, I've often been prompted to philosophize about climbing and its role in my life in particular and in life in general. This blog is in part, a reflection of those musings as well as new ones that continue to come along.